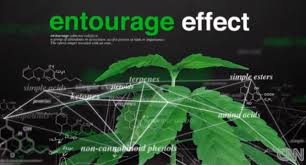 Have you ever taken a close look at your cannabis buds? If yes you will realize that they are covered in sticky, shining dots of resin, and in this resin are hundreds of therapeutic compounds imbedded that contribute to the effects and medical benefits of cannabis. Most cannabis lovers are  likely already acquainted with the plant’s two most famous compounds, THC and CBD , but it should be noted that  there are many other compounds produced by cannabis  plant in lesser abundance that seem to play a supporting role in the overall effects of a particular cannabis strain. This theory that various marijuana compounds work together to create unique effects and medical benefits is known as “the entourage effect.”

What does the entourage effect imply? 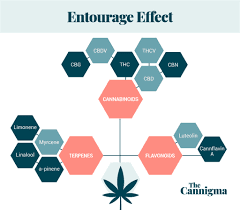 When marijuana is smoked or vaporized, the human bodies take in hundreds of botanical compounds, each one arriving with its unique effects and benefits, and their behavior may change in the presence of other compounds. This is what is known as the entourage effect. This theory is just like trying to look at how your mood might change depending on your social environment?, How you behave when you’re alone, at a party with strangers, or hanging out with your best friend and how  your mood and the personality you project shift depending on who’s in the room. To illustrate the entourage effect in cannabis, this article look at two compounds you’re likely familiar with: THC and CBD. In a research carried out in 2010, patients with cancer pain administered either a pure THC extract or an extract containing near-equal levels of both THC and CBD. It was observed that patients given the THC/CBD combo reported having less pain

But cannabis is far more than just THC and CBD as it also produces other compounds such as CBN,CBC,CBG and dozens more as well as  other aromatic compounds  known as terpenes readily found in the essential oils of lavender, orange, black pepper, eucalyptus, and much more. With such a diversity of useful compounds in marijuana, scientist suggest that the possible synergies could make your head spin with excitement, even though there are very few studies which have explored these synergies in humans this theory is thus supported by a small body of research, and, of course, loads of anecdotal evidence from curious marijuana lovers around the world experimenting with new varieties of the plant. 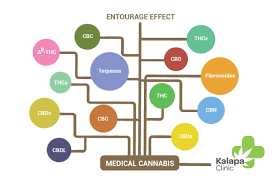 The theory of the entourage effect was thoroughly analyzed in a review titles “Taming THC: potential cannabis synergy and phytocannabinoid terpenoid entourage authored written by Dr Ethan Russoa neurologist and pharmacologist who has long studied marijuana compounds and how they affect the body. In this review, he detailed the studied benefits of common marijuana compounds, and based on their pharmacology, described their potential synergistic effects. For example he revealed that  the cannabinoids CBD and CBG have been found to inhibit the bacterial staph infection MRSA and how  they might  be even more effective when combined with the MRSA-fighting terpene pinene or when prepared with terpenes that increase skin permeability. For example a strain like Granddaddy Purple has cannabinoids and terpennes such as THC (diamonds), myrcene (blue), caryophyllene (fuchsia), pinene (green). Its potential synergies could be gotten from understanding the potential benefits of THC, myrcene, and caryophyllene, and  one might recommend this strain to someone looking to achieve sleep (thanks, myrcene), while simultaneously addressing pain and inflammation (thanks, THC and caryophyllene)

Some consumers prefer buds over extracts because of the diversity of cannabinoids and terpenes native to marijuana flower and also the so many compounds with their own respective potential benefits in the flower to enjoy.  The pine-scented terpene known as pinene is known be of help in counteracting compromised memory caused by THC. Equally a combination of CBD and the peppery terpene known as caryophyllene may be beneficial in the treatment of addiction. Also CBD and the citrus-scented terpene known as limonene might work together to alleviate anxiety. Lastly, THC combined the cannabinoid CBN can potentially yield enhanced sedating effects

So which marijuana products are more likely to promote this so-called entourage effect? 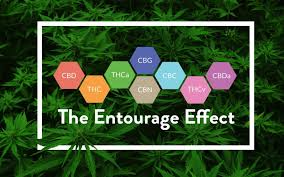 Marijuana flower certainly contains a wide range of cannabinoids and terpenes by virtue of being a raw herbal product. It should be notes that some cannabis extracts also offer a rich diversity of cannabinoids and terpenes. They are known as full-spectrum cannabis extracts. Full-spectrum extracts can come in many forms such as oils, ingestible capsules, dabs, vape cartridges and what characterizes them as “full-spectrum” is the long list of chemical compounds imbedded in them. That implies that the extract could deliver THC, CBD, CBG, CBN, myrcene, caryophyllene, limonene, and much more all in one convenient package.

It should however be noted that not all marijuana extracts capture the wide range of compounds produced by the cannabis plant. Some are refined as a means to remove THC known as broad-spectrum cannabis extracts or formulated to contain one single compound, usually CBD or THC known as isolates. However, though many people prefer marijuana products that provide lots of cannabinoids and terpenes, there are reasons to enjoy isolates since; you know precisely which cannabinoid you’re ingesting, and you don’t have to worry about absorbing any cannabinoids you don’t desire.

Pain relief with Cannabis without the ‘high’

December 19, 2019
Buy Marijuana online without any risk. Buy Weed Online without medical card or prescription. Entirecannabis Sells Top-shelf Medical Marijuana Products online.
No random orders. Place an order only when you are ready to pay. This website is only for those are seriously interested in top-shelf marijuana products.